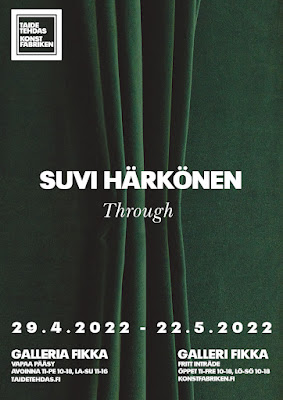 "The exhibition Through consists of relief-like textile sculptures. The Viewer's gaze gets lost in the shadows of the elegantly glowing velvet draping. The abstract images that form through the draped textiles lead us away from the moment, behind the horizon and under the skin."
Porvoo Art Hall / Gallery Fikka
Läntinen Aleksanterinkatu 1, 06100 Porvoo
Open Tue-Fri 10-18, Sat-Sun 11-16
Photo in poster: A detail of Forest (2021)
**********
Upcoming exhibitions in 2022
Past times - years, actually - have been much about change and being unsure of what the future will hold. I have two exhibitions planned for the year 2022. First in May at Gallery Fikka in Porvoo Art Hall and the second one in August at Gallery Katariina in Helsinki. These shows will include my sculptural pieces as I´ve lately been concentrating mostly on them. I have not abandoned installation but with the uncertainty hovering over everything right now - all the cancellations and restrictions, all the new realities we´re facing - I decided to go smaller in scale and dig into my materials. I´ve delved into the worlds of luscious velvety drapes, their delicate surface, their feel of timeless glamour. Come spring I welcome you to come and see the results yourself. Until then, stay safe!
**********
Artists at Art Factory
Kulma, Porvoo Art Hall
30.10.-22.11.2020
Welcome! 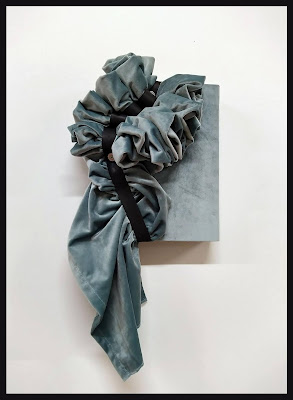 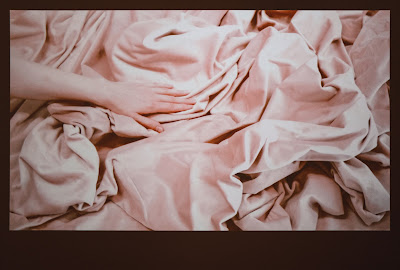 The Need installation deals with the need for an accepting human touch. Touch is one of our first experiences in life, and the lack of touch is one of the most harmful things to an individual. The exhibition constructs a landscape where the lack of touch makes one build something between oneself and others, something through which they could compensate for the experience of loneliness and missing out. This protective layer covers the vulnerable flesh and a living yearning.

Härkönen’s works often portray physical experiences of an individual in relation to a community, experiences that are difficult to verbalize. They urge the viewer to stop and let the subtle elements form spaces where one can place oneself in a landscape of otherness, separateness and experiences of alternate realities. The minimalist and meditative works form as a result of the combined effect of visible structures, an empty space and the viewer’s presence.

Suvi Härkönen earned her BA in Fine Arts from the Lahti Institute of Design and Fine Arts and MA in Visual Culture from Aalto University. She mainly works with experiential and spatial installations. Härkönen’s works have been on display at both solo and group exhibitions since 2009. She lives and works in Porvoo.

The artist’s work has been supported by Svenska kulturfonden and Arts Promotion Centre Finland. 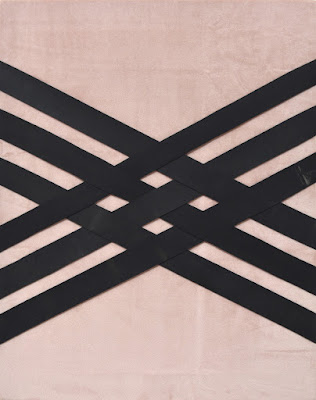 Need deals with the need of an accepting human touch. Touch is one of our first experiences in life and if lacking, one of the most harmful to a human individual. The exhibition constructs a landscape in which the lack of touch makes one build between oneself and the others something through which to compensate one's experience of loneliness and lack. A shielding layer covers over the vulnerable flesh and a living yearning.
Härkönen's works often portray physical experiences of an individual in relation to society, experiences which are sometimes difficult to verbalise. The work urges the viewer to stop and give way for subtle elements to form spaces in which to set oneself into a landscape of otherness, separateness and experiences of alternate realities. The minimalist and meditative installations form as a result of visible structures, empty space and the viewer's presence.
Suvi Härkönen graduated with BA in Fine Arts from Lahti Institute of Design and Fine Arts and with MA in Visual Culture from Aalto University. She works mostly in the field of installation. Härkönen's works have been exhibited both in solo and group shows since 2009. She lives and works in Porvoo, Finland.
Supported by Svenska kulturfonden and Arts Promotion Center Finland. 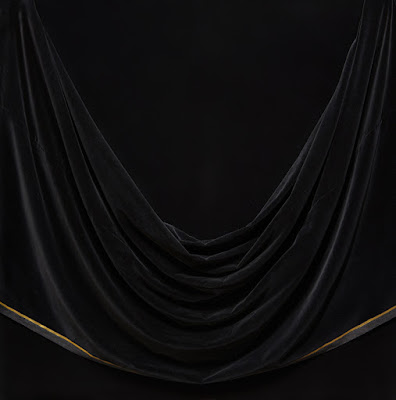 The new solo exhibition of Suvi Härkönen, Dreams at the End of the Night, is comprised of three separate works that together form a dreamlike landscape and an environment free from the demand of logical understanding. Five fabric constructed elements revolve slowly as featherlight beings locked in their movement in the exhibition's titular installation. The dark velvety softness of Fade closes the viewer in to witness a fading character's inner conflict at the moment of battle. Draft for a Dreamscape (Maze I) on the other hand shows some of the concrete elements of an installation and makes visible the structure which the installation environments are built upon.
The dream theme of the exhibition can be thought of as a metaphor since the works don't portray dreams as such. The dreamlike-ness is used as a tool to handle things that are by their nature ambiguous, based on sensory experience or are otherwise devoid of precise form. The connection of dream to subconscious, and through subconscious to analyzing of the world, works as a living base from which to approach everyday phenomena in the society as well as those connected to human nature.
”I build experiences into spatial form to bring them approachable in a physical way - directly bound to the body - instead of mere imagining and identifying. My work forms as a combined effect of built structures, empty space and the viewer's experience. I form minimalistic and meditative environments where the experience has a possibility and a space to occur thus making the installation come to life.”
Porvoo Art Hall
Läntinen Aleksanterinkatu 1, 06100 Porvoo
Open Tue-Fri 10-18, Sat-Sun 11-16


"The powerful dance performance follows a humanoid robot with an awakening sentience, living in black liquid and being fed by it. The choreography draws its inspiration from the movement of the newest multi-jointed robots and sci-fi movie imagery. The work prompts one to ponder the relationship between human and technology and consider the questions and feelings raised by the subject. The audience views the performance next to a water pool dressed in rain cloaks.


Robots Don’t Dream is a dance performance based on an installation of the same name by visual artist Suvi Härkönen, whose 3 x 6 metre large pool of black water is the impressive set for the performance."
Showtimes: 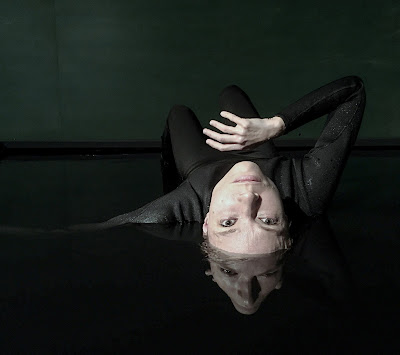 "Come to see the imaginary human robot which lives in a black fluid from which it feeds. The robot is instructed through a futuristic transfer of information by this mystical fluid to move and dance. The liquid implements algorithms directly into the robot’s brain. The robot executes routines with microscopic accuracy while moving with greater fluidity and diversity than modern day articulated robotics. The show suits all those interested in science fiction, anime, cyberpunk, comic book heroes and robots. The choreography is strong and dynamic. We recommend that under 12 year olds are accompanied by adults.
Internationally acclaimed dancer Tanja Illukka performs in a black wetsuit as a human robot, which can be thought of as a person who becomes a technical instrument and has a human body. The relationship between people and technology is one of the fundamental questions about technology and a theme that awakens feelings from fear to enthusiasm. The debate if humans are in control of technology, or if technology dominates humans, has been relevant ever since industrialization and is closely related to modern times. The 21st century developments of new applications of robotics makes this issue a relevant topic once again.
The powerful breathing of the dancer, low frequency bass sound and the splashing of liquid set the pace of the performance and create an intense and gripping atmosphere where the spectator has a clear role. Dance reflects the individual’s subconscious conflict with the instrumentalizing powers of society. The central idea of the performance is that attempts to make people into instruments and to control change will go astray.
Robots Don’t Dream is a dance performance based on an installation of the same name by visual artist Suvi Härkönen, whose 3 x 6 metre large pool of black water is the impressive set for the performance.
Each performance has space for 40 viewers. Members of the audience are given monocoloured rain capes to wear for the show. Spectators watch the performance in a clear relationship of power towards the dancer moving in the pool. The audience with their uniform capes becomes a mass that has lost signs of individuality. This reinforces the opposition between individuals and faceless machinery. The rain capes also protect the audience from splashes."
Duration approximately 30 min
Performances at the Museum of Technology, Viikintie 1, 00560 Helsinki, Finland
Thursday 12.10. 18:00 Premiere
Sunday 15.10. 15:00
Thursday 19.10. 18:00
Sunday 22.10. 15:00
Thursday 26.10. 17:00
Sunday 29.10. 15:00
Thursday 2.11. 17:00
Sunday 5.11. 15:00
Thursday 9.11. 18:00
Sunday 12.11. 15:00
Thursday 16.11. 18:00
Sunday 19.11. 15:00
Thursday 23.11. 18:00
Sunday 26.11. 15:00
Thursday 30.11. 18:00
Sunday 3.12. 15:00
Thursday 7.12. 18:00
Sunday 10.12. 15:00
Tickets 20e/15e can be purchased online
https://holvi.com/shop/ismodance/
or half an hour before the show with cash only.
Tickets include free entrance to the Museum of Technology on the day of the performance. 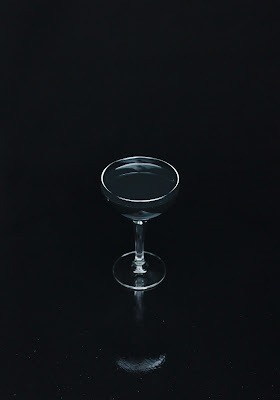 "The work featured in Hippolyte Gallery in August is an installation by Suvi Härkönen that includes water, light and sound – elements familiar from the artist’s previous works. The new piece explores the interplay of privilege, status and fear.
In her new installation at Hippolyte, Härkönen returns to the same elements she used in her previous work, Robots Don’t Dream, that has been presented two versions in 2015 and 2016. The new piece features a pool of water, sound and light, but it also includes sculptural elements, one of which is a glistening tower rising up from the centre of the pool.
Covering most of the floor area of the gallery, the water is dark and opaque, yet the movements of its surface create reflections of light on the walls. The meaning of water shifts, reflecting the viewer’s thoughts and expectations. Static and dark, it seems unknown, impenetrable, yet when it ripples it creates glowing patterns all around. The water surrounds the central tower like a moat, isolating it. Viewers can touch the unmoving surface of the water, but cannot reach the structure rising up in its centre.
The emphasis in Suvi Härkönen’s works is on experientiality. Instead of discrete objects, her installations establish all-encompassing environments. They turn the focus on the viewer – or the experiencer, to be more precise – as a participant and instigator, both reiterating and manifesting themes relating to power relations.
Suvi Härkönen (b. 1982) graduated from the Institute of Design and Fine Arts at Lahti University of Applied Sciences in 2011 and from the Master’s Degree Programme in Visual Culture at Aalto University in 2014. She has exhibited her work in solo and group exhibitions in Finland since 2007. In summer 2015, she designed a public pavilion for the Pori World Expo event/exhibition concept held in the Central Square in Pori."
- Photographic Gallery Hippolyte